How to Make Your Own Running Studs 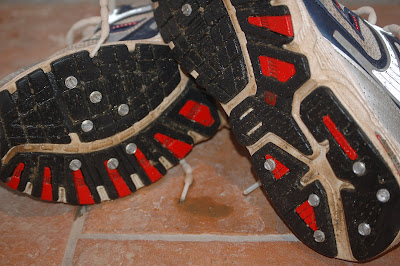 What the heck are Running studs?

No, this is not about good looking guys in shorts and singlets….you have to find someone else’s blog for that…This post is about winter running and an experiment I tried after reading an article in an issue of RunnersWorld.

Traction has always been a problem of mine partly because my shoes of choice have a very low profile tread design, partly because of the location of my long runs (country roads that are not necessarily cleared and are hilly) and the fact that most of my marathon training takes place in the winter months, but also that I have hurt myself before and have come close to more serious pulled muscles and ankle injuries on more than one occasion.The article discussed how you can modify your regular training shoes to have better grip when running in winter conditions by installing plain old sheet metal screws.   A couple dozen screws, a power drill, and voila! Instant running studs…

To make them, I popped in the hardware store and bought a pack of 1/2in. self tapping sheet metal screws.  They are the ones that have a hex head with raised edges. I would have preferred 3/8in. but they were out of stock.  There are 24 in a pack so I figured that was more than enough.

When I got home, I pulled out my trusty cordless drill and a hex-head bit and brought it into the den along with my shoes and the screws. My wife looked at me strangely as I placed a screw under my shoe and drove it in.

“You’re putting the pointy end in that way?”, she inquired like I had no idea what I was doing. I pretended I did and showed her the picture from the article. I drove  the screws into the sole of my shoe (3 near the heel, a few at the midfoot, a few under the ball, and a couple toward the toe – see picture above).

Problem is, I realized that in all the exitement of making my first pair of running studs, I had put fourteen on one shoe which meant I only had 10 left for the other.  So I removed one and decided I would test which configuration worked better; thirteen or eleven.

The next day, I set out on my run.  The screws gripped very well in the snow and on the ice. I can’t say which was better but I did notice I was missing some traction for an adequate toe-off in both feet. I also noticed that the studs didn’t make me lose traction on clear pavement, but they did make a clippety-clop sound.

I assumed the running studs would wear out faster on the bare asphalt as well so it wasn’t long before I found myself seeking out the shoulder of the road in order to run on the packed snow and ice with my newfound traction.

For my second run with the running studs, I took a different route with much more snow. Traction was still very good.  But there are a couple of problems I noticed when using running studs; surprises and overconfidence.

When running in the snow with running studs you just don’t know how hard, or how deep, the snow is and there may even be water or ice underneath.  This can lead to a serious injury or simply getting your feet wet.   While seeking to run in the snow instead of the pavement, I once stepped on a hard ice chunk embedded in softer snow that caused my ankle to roll outward.   I felt some pain but ran through it and it subsided.

I encountered the other problem during my third run.  The temperature was at just about freezing, and it had rained overnight. The shoulder of the road was a mixture of snow, ice, and slush. It wasn’t long before my footfalls sank through the snow and into the slush underneath. I felt the water infiltrate my toebox, but the traction was still fine.

After this last run, I decided to wash my shoes and inspect the studs.   I had done three long runs with my running studs and the rear studs toward the outside of my heals were almost completely worn down.  I had to use pliers to take them off.  The rest of the running studs looked in pretty good shape.

I also checked out my orthodics and found the the pointy ends of the screws had actually left indentations in my insoles under the balls of my feet even though I don’t feel them protruding through the bottoms of the lasts. This means that the pressure from my weight while running actually compressed the outsoles of my shoes so much that the screws came through and into my shoe.  I will have to switch these out for 3/8 in. screws if I don’t want to ruin my insoles and orthodics.

So the experiment was a success, the home-made running studs actually do aid in increasing traction but some adaptations were required.

I have also started wearing gaiters that have helped immensely to keep the snow from coming in the tops of my shoes while I’m in the snow with my running studs.

p.s.  I hope you can encourage me to continue to run in winter with my running studs while I train for the Rome marathon by making a donation to the Leukemia and Lymphoma Society.

This entry was posted in Healthy Lifestyle Tips and tagged how to make your own running studs, running studs. Bookmark the permalink.

4 Responses to How to Make Your Own Running Studs