Question : How do you effectively manage 43,000 people?
Answer : You ask the organizers of the NYC marathon how they did it!

I could not imagine running in this sea of people until I was actually a part of it…and the funny thing is, I didn’t realize the magnitude of it all until I saw the event aerial photos afterward. Sure there were several wave starts and many corrals, nothing new there, but the experience on the ground was no different than any other high participation marathon I’ve run (Boston, Ottawa, Vancouver, San Diego, Disney). But looking purely at the numbers, these pale in comparison to the NYC marathon, so the NYC organizers must have got something right.

Not being familiar with the big apple public transit system, I was a bit apprehensive about getting to the start via subway and then taking the ferry to Staten Island. There was no need to worry, though. I walked 3 blocks from my hotel and paid my subway fare just in time to catch a train direct to the ferry terminal. 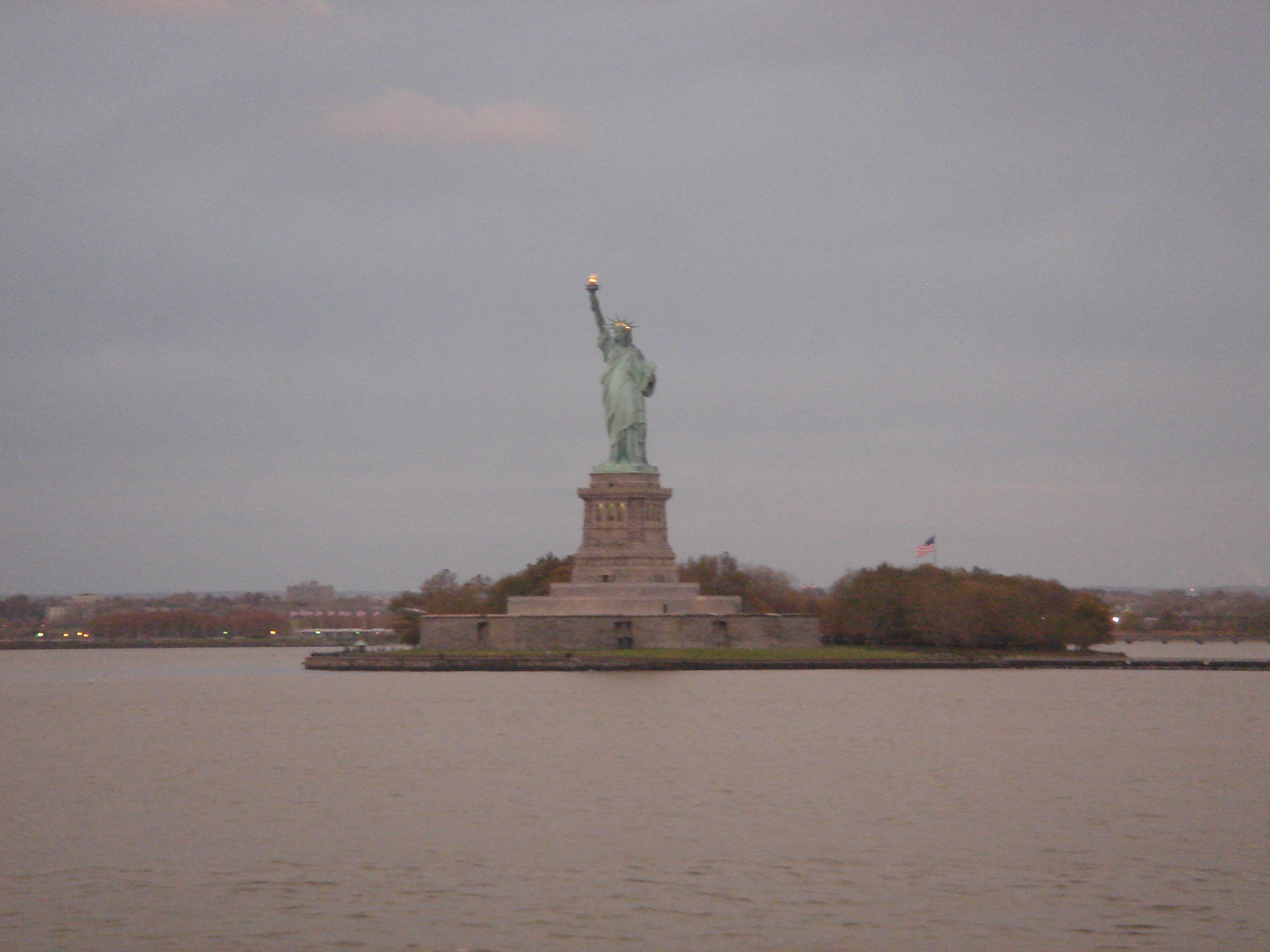 At the terminal, there was a crowd going in and I had some time so I skipped across the street to the McDonalds to grab a coffee and a bagel. The runners were being corraled right onto the boat and it went smoothly as ferries were coming and going like clockwork – the wait for the coffee (as a flustered new McD employee learned how to operate the cash register) was the longest one of the entire day… The sky was overcast on the ferry ride over but I still managed to take a few pics of the skyline and statue of Liberty (as any self-respecting tourist should).

Once on the other side, the choice was to wait indoors at the terminal or hop a quick busride to the athlete’s village. I waited a few minutes to use the porcelain toilets knowing that portapotties would be the only choice from this point on. In hindsight, I should have just gone ahead and taken the bus right away…there was a ridiculously long line for a dirty toilet that had no paper – ’nuff said. The minute I stepped outside of the terminal there were literally several dozen clean and empty portapotties just waiting to be used. The same thing at the other end of the busride as well. Now you know.

A short walk to the athlete’s village just in time to catch a glimpse of a couple elites making their way to their VIP area. For the rest of us mortals, each wave had their own “village” where they could wait for their corrals to be called. Each village had bagels, coffee, and other stuff – I realized my stop at McDs was not necessary, but I wish there were bananas, though. I found a piece of real-estate and proceeded with my pre-race routine. Within 30 minutes I was ready and my corral was being summoned so I dropped off my bag and headed over to the start – no waiting here either. On my way I had one last (nervous) pee – it was more opportunistic than anything because the line was so short. Afterward, I quickly found the spot where my corral joined the wave. All this time I thought I was in G corral but it turns out I was in C, just a couple of groups behind the elites! What a thrill! I actually saw them get ready and make their way to the start just ahead of me…then we started to move forward and up onto the Triborough bridge to await the start gun. I snapped a few pics and waved at the folks in the other wave below the bridge. 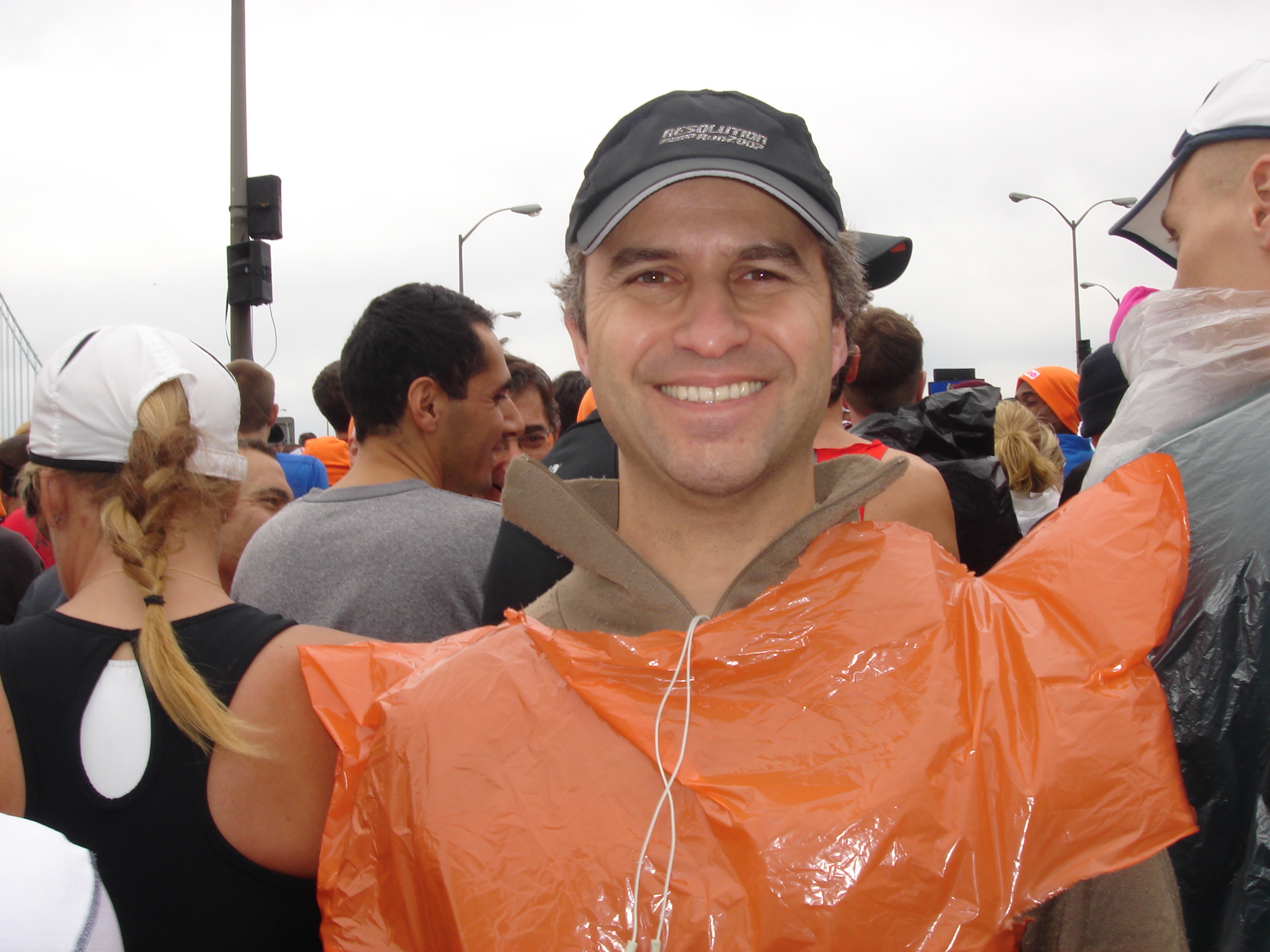 The excitement was starting to emanate from the crowd around me. And just like that, we were off, sort of. I tried not to go out too fast but there were many who wanted to weave through the mass to get ahead. I even saw one fellow lose his footing and fall as others tried to avoid causing a pile up. I found my pace and some room within about two minutes of starting and then I settled in to enjoy the sites. I was right on my plan. It was lining up to be an “A” race for me.

I had not really studied the course map elevation profile that much but I knew there were 5 bridges so I used those as my reference points. I was finding we were doing a lot of downhill running so I tried not to go too fast. At one point, I asked a fellow next to me when the uphills would start and he said; “are you kidding me?” “Maybe I should have spent a bit more time on my course prep”, was my thought after that. Anyway, within about ten minutes, we headed up the Pulaski bridge and I was feeling strong. I was still on a 3:15 marathon pace, but the quarter mile climb did not go unnoticed by my legs.

By the time I got past the Queensboro bridge, my pace had slowed down and I was in the 3:20 finish time range. The climb up the bridge slowed me down and I was careful not to abuse my legs too much on the steep descent on the other side, but I think the damage was done already. The most amazing thing about crossing this bridge is that you can actually hear the cheering of the crowd on the Manhattan side. I did not recoup the time I lost on the ascent going back down the other side. I didn’t even realize until after the race, that there were actually runners on both levels of the bridge!

For my run up Manhattan’s East side, I had to concentrate on maintaining my pace. There were some uphills and downhills but I have to say I didn’t really notice much other than trying to keep my time. But I could feel it getting slower and my mental calculations were getting more and more difficult. I was definitely fatigued (but not nearly as much as I would be soon enough…

Crossing the Willis avenue bridge into the Bronx was not too bad but I had no juice left and saw the 3:30 pace bunny go by me. I resolved to keep up with him but he seemed so fresh on his feet and also his pace looked so much faster than mine that it was hard to keep up. By the time we crossed the Madison Avenue bridge, my hopes of re-qualifying for Boston in 3:20 were pretty much quashed so I decided to just run the rest of the course as best I could. I have to say it was the crowds that kept me going all the way down Fifth Avenue but it seemed to take forever to get to the Central Park entrance. It was a mild incline the whole way and I took a couple of walk breaks just to get there. The 3:30 pacer pulled ahead and I couldn’t keep up.

Once we veered into the Park, I had a newfound drive and tried to pick up the pace one more time for the last 3 miles. I tried but I was really running on rubber legs by then. I know I wasn’t alone in this predicament because I passed quite a few people along the way. When I finally veered the last corner near the intersection of Central Park South and Central Park West, the crowd was deafening and just pushed me up the chute to the finish. I was done in 3:37 and I was literally done… 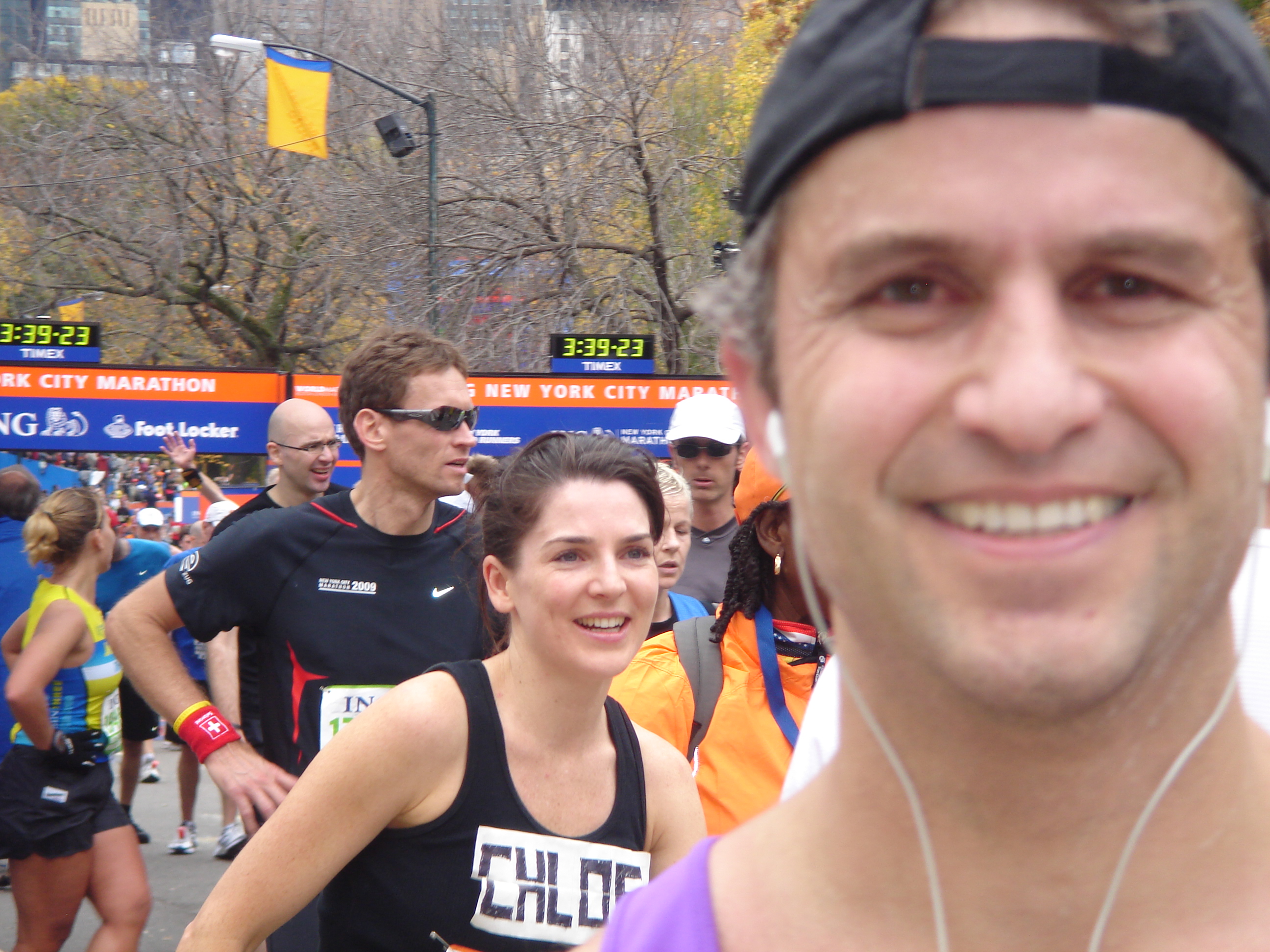 After crossing the line, we walked for what seemed like miles to get to our gear trucks. This was probably a good thing because I got to rehydrate and take a couple of salt packets while cooling off. Once I reached my desgnated truck, I got my gear in no time flat and ditched my runners to put on my trusty flip flops. What a relief! I then walked out of the park onto Central Park West and dicovered I was a mere 100 feet from my hotel! I couldn’t have planned it better than that. I promptly grabbed a shower and met up with some friends for a well-deserved drink and dinner.

I was disappointed for not meeting my goal time, but I have to say that this was my best marathon experience ever! It literally went without a hitch from start to finish and I learned an important lesson along the way; I should have done more hill training in my preparation for this race.

For those of you who are contemplating the NYC marathon, I highly recommend it!